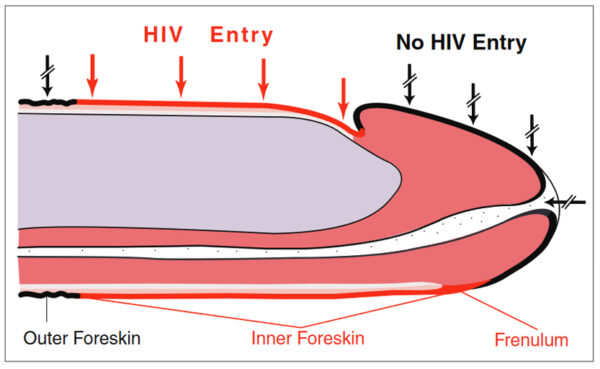 There is some evidence to suggest that circumcision can help reduce (but not eliminate) rates of HIV infections in heterosexual men, particularly in Sub-Saharan Africa.

According to the World Health Organisation, three randomised trials in Kenya, Uganda and South Africa show that circumcised men have a 48% – 60% lower chance of becoming infected with HIV. This means there is still a 40% to 52% chance of contracting HIV during unprotected sex.

Since 2007, the WHO has recommended circumcision as a way to reduce the spread of HIV in Southern and Eastern Africa where infections are particularly high. It re-iterated this advice in 2020.

It is not clear if circumcision can help reduce HIV infections outside of sub-Saharan Africa as there have not been enough studies.

According to studies cited by the WHO circumcised men generally have a lower risk of contracting penile infections tha uncircumcised men.

The area under the foreskin is a warm and moist environment, creating perfect conditions for most bacteria to reproduce, particularly if the area isn’t cleaned properly.

In addition, the inner skin of the foreskin is mucosal, which means it is like the skin inside your mouth. This type of skin is much thinner and more susceptible to cuts and grazers than the skin on the outside of the penis and could act as an entrypoint into the body for any bacteria or viruses.

Circumcision is likely to be less effective in preventing HIV in areas with access to clean water and where it is easier to take regular showers to clean the penis. Unfortunately, no studies have been undertaken to evaluate the effectiveness of circumcision on HIV transmission in Europe, the United States or other developed countries.

Making sure you wash and clean your penis is important regardless of whether your are uncircumcised or not.

Whilst circumcision removes a potential area for bacteria and viruses to live you should still wash your penis every time you take a shower or bath.

It is also important for uncircumcised men to wash under the foreskin as there is an increased risk of dead skin cells, skin oils, bacteria and secretions such as urine or pre-cum to accumulate. These can often build to cause a thick white substance called smegma.

3 replies on “Does circumcision prevent HIV?”

One word: Education. I don’t know, if this is just a rumour, HIV-positive male on Sub Sahara region have had unprotected sex with HIV-negative virgin to get disease cured!

I really don’t understand UNAIDS VMMC campaign. If the circumcision just decreace the risk of getting HIV. And after the procedure you’ll get free condoms to use. Why not to give them condoms and educate how to use it. We have PrEP now in developed countries.

In reply to Mike: unprotected sex with a virgin will simply give the virgin HIV – it is just a male ploy for more sex.
Circumcision substantially reduces the risk of catching HIV/AIDS, as explained in the article, by 60 percent or more. In other words, 6 out of 10 acts of sex will be HIV-free but 4 out of 10 will transmit the disease. If you ALSO use a condom, that will also further reduce the risk of catching HIV/AIDS – but there may still be a risk.

Exactly, but is the reduction of the risk enough to justify non consent Routine Infant Circumcision in US. If you compare HIV-rates between Europe and USA. USA “win” still, even though more than 60% of infant lost their foreskin on his first week on earth. Better (or at least some) Sex Education to school!

Adult male circumcision on UN program is luckily voluntary, but is the result success?