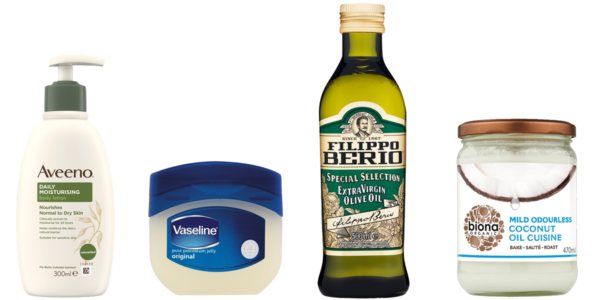 4 household items you can use as lube!

Once you start jerking off with lube it’s hard to stop. But what happens if you run out mid-session? Or you’re stuck on a desert island and you forgot to pack it?!

Luckily there are some good replacements that you can find in most households. Some are so good you might never buy ‘real’ lube again!

You can also read this article about the best sexual lubricants you can buy.

Vaseline has been used as a personal lubricant for pretty much as long as it has existed. It’s a petroleum jelly made invented in 1859 that’s made from a combination of mineral oils and waxes. It’s designed for use on your body to help moisturise and heal.

It’s a decent lube substitute for a number of reason. First off, it lasts a long time and doesn’t dry out like some water-based lubes do. It’s also a thick jelly that melts on contact with skin, which makes it a little less messy than some alternatives, although it can stain sheets.

You should only use Vaseline for jerking off, however. It’s not suited for vaginal intercourse since it is incompatible with condoms and can cause bacterial infections in the vagina.

In recent years there’s been a real trend for using coconut oil in, well, everything. You probably have a jar of it at home. But maybe these people aren’t just using it to cook….

Coconut is a great natural lubricant that’s also touted as a moisturiser. It’s normally a solid white mass at room temperature, but it will melt on your skin. It’s oil-based, so it will also dry much less slowly than water-based products and let you jerk pretty much as long as you want without having to re-apply.

The flip-side of being an oil based lube is that it is incompatible with condoms as it can lead them to break. Oh and be careful where you rub it, as it can stain!

Again, another natural oil. This one’s a liquid at room temperature, so it can get slightly messy during the application process!

Again this an oil, so you shouldn’t use it with condoms or for vaginal sex, and it might stain your sheets too. But if this is all you’ve got, go get ’em, boy.

A popular one among teenager boys everywhere (everyone knows you aren’t using it to ‘moisturise’!), lotions are often easily accessible and easily disguised.

Their effectiveness depends on which particular brand and formulation you use. You should be careful to read the label. You probably shouldn’t be using them for sex, either.